Inherent bad faith: Alternatives for deducing the Indo-Lanka Accord 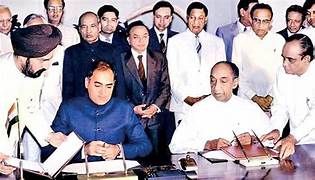 For those aligned with the realist tradition in international relations, the creation of the Indo-Lanka Accord becomes a point of reference for corroboration. The standpoint is that India was guided by the logic of national interest, which alludes to factors such as security and relative capabilities. Indeed, such factors continue to animate the realist school of thought. After all, the accord was signed in 1987 during the Cold War and contracted in the shadow of the Indo-Bangla Treaty of 1972 and the Indo-Soviet Treaty of 1971.

Such a deductive process to trace the origins of the accord might prove useful since the Indo-Soviet Treaty of 1971 itself was the result of India’s partition in 1947. Indeed, the very notion of an India situated between two Pakistan to its west and Pakistan to its east was deeply troubling and was actualized by wars fought in 1947 and 1965. Moreover, such a war scenario aggregated in the European theatre in almost identical fashion during the World Wars and proved to be decisive. This surely would have been in the minds of India’s security planners.

Although national interests vary according to circumstances, it is this similarity of motives among nations that allows realists to reconstruct the logic of policymakers in their pursuit of national interests — what Hans Morgenthau called the “rational hypothesis.” This concept defines the autonomy of international politics and allows for the analysis of foreign policy regardless of the different motives, preferences, and intellectual and moral qualities of individual politicians.

Realism and other models of international relations sometimes find it difficult to offer an intrinsic analysis of foreign policy behaviour. On the other hand, decision-making models can take domestic processes into account to explain India’s external behaviour. For instance, take Indira Gandhi’s decision to train Tamil guerrillas in India in the 1980s. Her game plan was to escalate the armed insurrection and leverage it to settle the issue.

What then was the issue?

Realists have often opined that the issue was the Cold War. After all, Richard Nixon had sent the US 7th Fleet to the Bay of Bengal to threaten India during the Indo-Pakistan War of 1971 and made a historic visit to China in 1972. Apart from this, Ceylon had allowed Pakistan’s planes to refuel in the island during the Indo-Pakistan War of 1971 because the planes could not fly over India to reach east Pakistan. J.R. Jayewardene was also perceived as warming up to the United States after sweeping the polls in 1977. The Sino-Soviet split and Pakistan acting as a bridge for Beijing and Washington in the 1970s that resulted in their rapprochement can also be alluded to.

As the chair of the Indian National Congress from 1964 to 1967, K. Kamaraj drew upon the Nehru legacy and campaigned for Indira Gandhi as Prime Minister after the death of Lal Bahadur Shastri. The approached proved successful. Despite Indira and Kamaraj having differences of opinion from 1969 because of the rupee devaluation move, she held him high regard. This seems to have provided an unassailable friendship between Indira and the Tamils so much so that she even considered contesting from Thanjavur in Tamil Nadu in 1978. Although it was not to be, the legacy lived on — her grandson Rahul Gandhi contested the Lok Sabha from Wayanad in 2019 and won with a record margin.

The relationship between Kamaraj and Indira cemented a lasting bond between the Tamils and Indira. The rest is history: in the 1980s, Indira began training and arming the Tamils.

John Kotelawala’s melodrama at the Bandung Conference and his decision to upset Jawaharlal Nehru, Indira Gandhi’s father, with sharp wit seems to be the earliest instance of an abrasive relationship building up with the Indian elite. The Bandung Conference took place in April 1955 in the aftermath of the Southeast Asia Collective Defense Treaty signed in September 1954. Hence, the conference played up a central dilemma for United States’ Cold War policy: by currying favour with Third World nations and claiming opposition to colonialism, it risked alienating its colonialist European allies.

Sirimavo Bandaranaike’s decision to allow Pakistani planes to refuel in Sri Lanka warrants further study and exploration by scholars. At first glance, this decision seems trivial for analysing future conflict with India because she was Indira Gandhi’s favourite. In 1974, Srimavo even went on to become the Chief Guest at India's Republic Day Parade — the country's highest honour in protocol terms.

The fact that Srimavo Bandaranaike, Sheikh Hasina and Benazir Bhutto were favourites of Indira Gandhi also warrants further exploration. Indira’s empathy with these leaders partly alludes to their similar circumstances. Srimavo’s husband was assassinated in 1958 and so was Sheikh Hasina’s father in 1975. Indeed, Sheik Hasina was provided asylum in India in 1975. Banazir Bhutto’s father Zulfikar Ali Bhutto was executed in 1979.

J.R. Jayewardene’s decision to not be outdone by Srimavo Bandaranike’s diplomatic triumph of hosting the Non-Aligned summit in Colombo in 1976 may partly explain his decision to veer away from this middle-path in global politics. Just like the obsession with competition in the form of sacrifices, banquets, and the search for distinction that characterized the formation of Greek city states in antiquity, J.R’s embrace of the United States received succour when he led the United National Party to victory by winning a staggering five-sixths of the seats in parliament in 1977. J.R also cosied up to Moraji Desai — Indira’s bête noire.

In 1981, Tamil Nadu’s Chief Minister M.G. Ramachandran battled with the Central Government to get the Thirukkural, a classic Tamil text, the status of national scripture. But Prime Minister Indira Gandhi, who had swept back to power just a year ago, spiked it citing the secular nature of India’s constitution.

Another wedge occurred between MGR and Indira when she was looking to contest from Thanjavur in Tamil Nadu after being stripped of her MP seat in 1978. Although Sivaji Ganesan had supported this, MGR turned her away from contesting the Thanjavur Lok Sabha bye-poll. Indira eventually became Prime Minister again in 1980 by contesting from Medak in Andhra Pradesh.

MGR may have been devastated at the death of Indira Gandhi. However, the rifts between Indira and MGR challenge the claims that MGR played an important role in getting Indira Gandhi to support the Tamil militancy.

When Indira and her son Sanjay lost the 1977 elections, Ranasinghe Premadasa referred to them as the cow and calf. Thereby, he alluded to Sirimavo and her son Anura also losing the elections in the island. Making fun of Indira’s defeat through a mocking reference angered not only the Gandhi family but the Indian public as well.

The creation of the Indo-Lanka Accord, as interpreted here, challenges realist accounts of the accord. While such realist notions cannot be fully ruled out, the accord offers a historical moment from which alternatives can be explored. Take for instance Ole Holsti's landmark study of the relationship between John Foster Dulles' beliefs and his mode of information processing. Largely as a result of Holsti's analysis, Dulles' name became synonymous with the "inherent bad faith" model in international relations. While our resources fall short for replicating such a ground-breaking study, this article is nevertheless an attempt along such lines.

The decision maker's worldview and predispositions toward political action are an important set of variables in the decision-making approach to foreign policy analysis. A variety of methods exist for evaluating these elements of a leader's definition of the situation based upon previous behaviour, public rhetoric, and archival and biographical sources. Operational code analysis, apart from evaluative assertion analysis, is one of these methods with scholars having developed criteria for being a good operational code subject. The subjects chosen in this essay do not necessarily fit the criteria for being a good operational code subject.

Professor Kulbhushan Warikoo is an eminent educationist, author and scholar, who

...
Protecting human rights without the United States: A response to Ron Ridenour
8 months 2 weeks ago
...