A Perspective on Tamil –Muslim Relationship 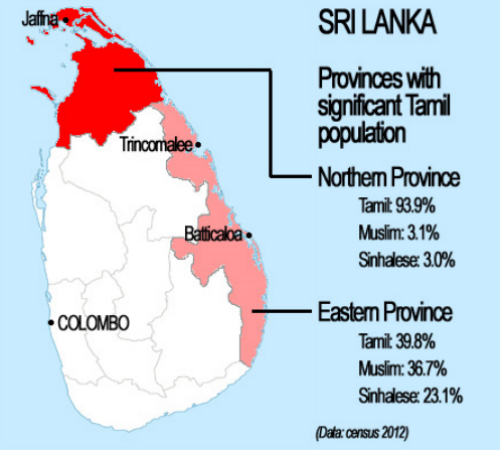 This essay is in two parts. Part one deals with the Tamil –Muslim relationship and the recommendations by the author to bring both Tamil-speaking communities together. Part two titled “Easing Tensions between Muslims and Non-Muslims”  will be published at a later date.

In Jaffna, the Tamil heartland, the Muslims had a healthy presence until they were expelled by the Liberation Tigers of Tamil Eelam (LTTE) in October 1990.  The Ancient Kingdom of Jaffna, subscribing to Hindu Agamic norms of city architecture, named its streets on the basis of castes that occupied them. Streets had names like Goldsmith Street, Paraya Street and Drummers’ Street based on the castes of its occupants. It was a dynamic system that was able to meet the changing environment that gave rise to new groups. Eventually, a Chonaha Street (i.e. Moor Street) and later a Parangi (Firingi) Street came into being as Muslims and Europeans moved in integrating the new arrivals into the ever-evolving social landscape. The Muslims had thus become an integral part of Jaffna’s social setting.

Although the hierarchically stratified Hindu caste system placed Tamil speaking Muslims and Christians at the bottom, these groups had their own “origin myths” to counter their low caste status. Notwithstanding the truth of the matter, the fact remains that Hindus consider non-Hindus low caste. While peace activists will hark to the ancient presence of Muslims in Jaffna to show good relations, it was never as equals.

With electoral politics being mooted in late-nineteenth-century by the British, all parties’ emphasized ethnic identity as a means of increasing electoral strengths. Accordingly, Tamils emphasized the Tamilness of the Muslims based on the language they spoke while Muslim leaders saw themselves as a separate ethnic group based on Islam (although Muslims in neighbouring Madras State identified themselves as Tamil) and an Arab bloodline. This sowed the seeds of doubt among Tamils about the loyalty of the Muslims and caused them to even look upon them as traitors. In reality, Muslim politicians like all politicians were building and consolidating their own base. Consequently, Tamils said very uncivil things about Muslims.

In Jaffna itself, social intercourse between the Tamil Vellalas who dominate Tamil intellectual life and the Muslims was limited to the realm of service delivery as the Muslims were essentially a service caste to the landowning Vellalas. Muslims served as their tailors, cobblers, butchers and grocers. At elite schools like St. John’s College, the missions had encouraged the admission of targeted castes like Parayas and Palanquin Bearers in the school neighbourhood, and also Muslims. By the 1960s, the privatization of schools (and also the creation of Muslim schools as part of cultural concessions to the Muslims) meant that these tailors (and others) went to government (Muslim) schools and the Muslims at elite schools had been reduced to a handful.

Thus by 1970, there was little in common between Muslims and Tamils in Jaffna except that many older Muslims were stalwarts of the Tamils’ Federal Party whilst many others were inclined to back  Alfred Duraiappah, an independent, business-friendly politician who made deals with the government in power in his quest to  become the mayor of Jaffna.

The Rise of Tamil militancy

By the 1970s Tamil militancy had arisen to become a potent force to counter the Sri Lankan Government’s anti-Tamil actions. Unfortunately for the Muslims, it marked the low point in Tamil-Muslim relationship that was to result in disaster within two decades.  The Tamil militants assassinated Alfred Duraiyappah the Mayor of Jaffna. The Muslims were isolated in their cloistered areas (Chonaha Theru, the Grand Bazaar and Small Bazaar). With state violence against Tamils on the rise in the early eighties, Tamils increasingly saw their future in a separate Tamil part of Sri Lanka, either separated from or federated within Sri Lanka. The Muslims whose trade necessitated dealings with the other communities of Sri Lanka were less sanguine about separation whilst those residing in the parts outside the Northeast identified themselves very much with the government of Sri Lanka. As Tamil guerrilla operations widened, the army began using an ever-widening network of informants to mount counter operations. In a time of tension and weakness for Tamils, it was both easy and natural to look for simplistic explanations and solutions: the Muslims were portrayed by the LTTE as the Fifth Column in their midst and ordered out within 24 hours in October 1990. An estimated 60,000 - 90,000 Muslims were expelled from the north. With the Muslims gone for almost three decades now, their properties encroached.  Given the circumstances of their expulsion, few Muslims possessed deeds to prove their ownership. Worse, most Tamils are not prepared to cede the enormity of what was done to the Muslims in the name of Tamil nationalism. Although no evidence has been presented to-date to show that Muslims had passed on information to the Sri Lankan army, many Tamils are passionately convinced of Muslim perfidy and vociferously justify their expulsion as a military necessity.

Now, nine years after the war ended in May 2009, Muslims visit Jaffna to inspect their lands but there has been no major effort to reclaim/reoccupy them. Many of the Muslims who were expelled are still languishing in refugee camps in Puttalam. There has been no movement regarding resettlement. The reason is that there is really no discourse between the Tamil and Muslim communities. This in itself is rather surprising because their problems are so similar – the rise of anti Muslim rhetoric and violence as evidenced by the actions of the Bodu Bala Sena (BBS), a Sinhala  Buddhist ultra-nationalist group; the inadequate use of the Tamil language, joblessness in the Northeast, the poorly developed and inadequately staffed universities in the Northeast, etc. Indeed, the common problem of being dispossessed of their lands and the building of Sinhalese settlements has the potential to bring the two communities together, but it has not.  There has been some interaction in securing the chief ministership of the Eastern Provincial Council with the help of R. Sampanthan, the Tamil National Alliance (TNA) leader. It is also said that Sampanthan had campaigned for Muslim candidates in the East because the climate is ripe for fearlessly emphasizing the common interests of the communities in the post-LTTE period.

Sampanthan’s intervention is a rare positive sign and shows the rise of moderate forces at the helm of the TNA, an LTTE creation. The TNA has now moved away from LTTE ideology and is firmly under the leadership of Sampanthan who has kept those with LTTE sympathies in check. M.A. Sumanthiran, MP, a Sampanthan protégé, has vocalized an apology to the displaced Muslims, stating “the eviction of the Muslim community from the North within 24 hours was nothing but ethnic cleansing.”  This is a major departure from Tamil silence on that dark LTTE period and offers hope for serious and lasting reconciliation between the two estranged communities.

Measures to bring about unity

To bring the two communities together again, the following actions must be undertaken by non-Muslim peace builders:

In Sri Lanka, the process of modernization triggered violence and chaos rather than trust and stability.  In deeply divided societies where there is a functioning or competitive electoral democracy that exists, politicians resort to all forms of strategies to win votes.  In Sri Sinhalese leaders formulated anti- Tamil policies to rally the Sinhalese. The result was violent Tamil mobilization. During the war, Muslim elites and politicians chose to side with the Sinhalese and successive regimes to win their rights and positions.  On the other hand, his Tamil polity controlled by the violent Tamil movements denied justice to the Muslims. Thousands of Muslims were expelled forcefully from Jaffna in October 1990; 300 Eastern Muslims were killed at prayer time inside their mosque in 1991 and Muslim wealth confiscated in the Jaffna, Batticaloa and Amparai districts of the North- Eastern Province. But a conflict resolution process supported by the global community does not give due space to the Muslim representation. As noted by me elsewhere in Journal of Asian and African Studies, “Muslim elites and intellectuals might have constructed a Muslim identity, but such construction could have made less impact if the Muslims had been treated humanely by the Tamil polity. Therefore, un-making or re-constructing the Muslim identity may not help build peace between the Tamils and Muslims as long as Muslims patch their differences and problems with the Tamils.”

Now, war with the Tamil Tigers is over. There is a relative peace in the island, but Tamil opinions argue that the conditions that triggered tensions and war between the Tamils and Sinhalese, as well as Muslims, remain unresolved (Interview with seven Tamils living in Toronto, Canada).  On the other hand, the Muslim democratic representations need to play ‘genuine and responsible’ political roles in the national affairs concerning Tamil and Muslim relations. In this regard, Muslim political forces should seek policies both to calm the fears of Muslims concerning the Tamils and to develop cooperation with the Tamils at the elite level to seek a political solution conducive to all.

Our study argues that Muslims in Sri Lanka seek to form an identity based on their faith - Islam.  During the war, Muslim elites and politicians chose not to support the Tamil demand for separation for obvious political and social reasons discussed above. On the other hand, the Tamil polity controlled by the violent Tamil movements denied justice to the Muslims. When the LTTE was defeated by the regime in a gruesome war, a section of Muslims celebrated the death of the LTTE leader.  But there was frustration and anger among Muslims when Sinhala extremists targeted Muslims in the so-called post-war period.  We argue that there should be conflict resolution strategies applied to the conflict and crisis faced by minorities and the Sinhalese majority.  The fears and anxiety of these communities should be addressed in a way that would help build reconciliations. Any future conflict resolution process should give due space to the Muslim representation.

On the other hand, as mentioned elsewhere by me the Muslim democratic representations need to play ‘genuine and responsible’ political roles in the national affairs concerning Tamil and Muslim relations. In this regard, Muslim political forces should seek policies both to calm the fears of Eastern Muslims concerning the Tamils and to develop cooperation with the Tamils at the elite level to seek a political solution.

Professor A.R.M. Imtiyaz taught in universities in Sri Lanka (South Eastern University) and China (Nanjing University). He is attached to Asian Studies, and Department of Political Science, Temple University, Philadelphia. Currently, he is in China for his research on Hui Muslims.  His research studies cover two major aspects—the symbolic politics of elites and politicization of ethnic differences, especially in Sri Lanka. His scholarly pursuits have led to publications at various international venues, including the Journal of Asian and African Studies (JAAS), the Journal of South Asia (JAS), the Journal of Third World Studies (JTWS), the Journal of South Asia (JAS), Asian Ethnicity, and Asian Affairs

Conference on India's G20: Implications for Indo-Pacific
3 hours 19 minutes ago
...
Is sea cucumber farming in northern Sri Lanka a Chinese checkpoint in Palk Bay?
2 weeks ago
...
India makes its own assessment of what would shape the security perceptions: An exclusive interview with Commodore R.S.Vasan
5 months ago